Menu
Welcome DJI Spark Pilot!
Jump in and join our free Spark community today!
Sign up
You are using an out of date browser. It may not display this or other websites correctly.
You should upgrade or use an alternative browser.

I think it unlikely the Drone40 in the article would be unavailable to civilians, but a version designed for that market would be awesome. There would be no need for many of the drone's capabilities other than photo/video. The claimed flight time and range is stunning for a quadcopter that weighs a half pound or less.

..
It's a little mini version of that flying egg drone that didn't 'take off' with consumers.

My SkyPixel
Reactions: I B Spectre

They're supposed to be a one of item, must plan to make them by the 10's of thousands, if they work well.

I suppose the grenade launch must be suitably 'gentle' as the thing has to do its job once airborne . . . and hand launch, well you'd expect it'd be as gentle on the unit as one can get.
Obviously ones fitted with explosives are single flight use

Just wondering how they are a one use item on say a reconnaissance mission, might be just as simple as a non rechargeable battery fitted.
Reactions: RotorWash

Not sure that the one-use scenario isn't primarily for the munitions role. Since they demonstrate being recoverable by hand, I would think most of the ISR (intelligence/surveillance/reconnaisance) role would allow reuse by changing mission modules. No idea of the unit cost, but you can bet a selling point would be at a price that wouldn't sweat consumability. The capabilities this offers to squad level ops is amazing.
Reactions: RotorWash

I B Spectre said:
The capabilities this offers to squad level ops is amazing.
Click to expand...

Oh yeah, up there with range exploding munitions.
I suppose if you need to blow someone up and / or 'neutralise' them, this tech will save soldiers lives . . . well, until all sides have them too.

The Black Hornet nano drone as used by US and Australian (probably many other) armed forces has been around a while.
Primarily a reconnaissance drone, amazing little things with controller and screen just like ours.
FLIR bought the product from Prox Dynamics and have incorporated their thermal camera tech into it.

This video shows this litte drone and some other ingenious insect drones, which would be even more stealthy.


Plenty of other research happening with these drones too. 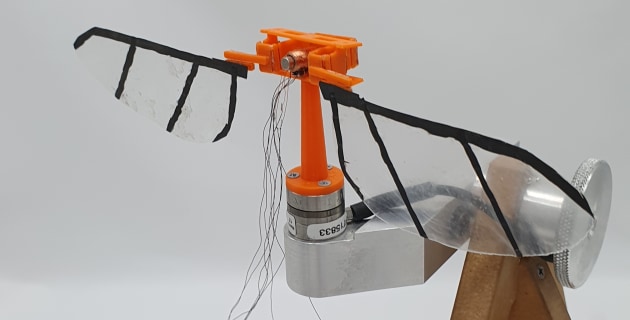 University of SA researchers have drawn inspiration from a 300-million-year-old superior flying machine – the dragonfly – to show why future flapping wing drones will probably resemble the insect in s...

An alternative to Mavic Mini?

F
Which is the best Frsky Receiver for your Racing Drone